Princess Nori, the only daughter of the Emperor and Empress, is getting married as we speak. Normally I wouldn't care, but it is an occasion to reflect on the pointless nature of royalty in this day and age. Y'see, by getting married to a commoner (as if there were anyone else to get married to), she forfeits her titles and lineage as Japanese royalty. From here on out, she and all her descendants are commoners.

I don't know much about this princess and her disposition, but I can imagine the transition from the sheltered life of the Imperium to normalcy - albeit very well-off normalcy - will be difficult. I wish her luck.

But that's not the main thing on my mind, reflecting on this rather cold tradition of the Empire. What I keep thinking is this: I hope she has sons. Lots of them. That's what the royal family has been waiting for - a male heir to the throne to follow the Crown Prince Naruhito. As much as everyone loves little Princess Aiko, there hasn't been a boy born to the royal family in something like 30 years, and people are starting to get worried. Some folks want to change the rules of succession to allow a girl to inherit the throne, but that's been getting boung up by traditionalists who would rather see things like concubines, adoption or the re-establishment of the aristocracy happen first.

So yeah, the cynical bastard in me hopes that un-Princess Nori and her husband have lots of boys, just to watch the royalists squirm.... 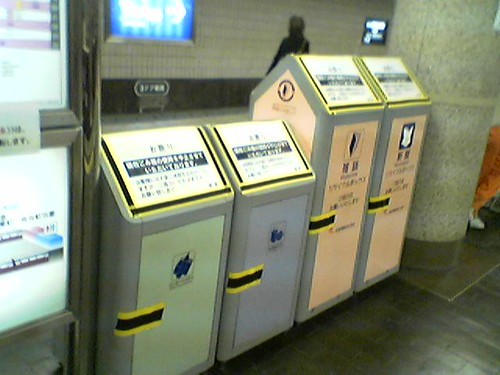 Dubya's in town....
Originally uploaded by MShades.
All the trash cans are sealed to deter the tehrists.
Collapse